Munchkin has a lot of products to make your life easier with a baby. I was lucky enough to review two of their popular items that are must-haves for around the house, or on the go! I say this because I’ve used them constantly since receiving them both in the mail. 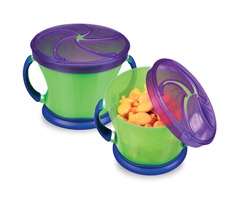 I’ve realized that the easiest way to keep my 8 month old entertained while I’m out and about, and he’s already reached his maximum attention on whatever toys I’ve packed, is a little snack. He’s also starting to gain some independence and loves to feed himself. This is great, but definitely messy! I love my new Snack Catcher®! The soft flaps on top make it easy for my little one to reach his hands in to grab a treat, while remaining spill free! That means no little trail of cheerios on my living room carpet, or in the car! There’s even a little space on the bottom to write your child’s name.This product is BPA free and dishwasher safe which is an added plus. 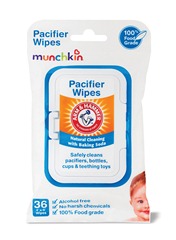 Now let me get to the Pacifier Wipes. I had seen these at the store before my son was born and I just didn’t get the hype. I figured a quick rinse off under some water would be fine if we had a pacifier that dropped. I also figured I would attach it to my son’s shirt with a little clip so it would be sure to stay put.

Now I won’t go anywhere without them! As son as my little guy realized he could grab stuff on his own, he began to pull his ‘binky’ out and throw it on the ground. This is especially true if he had a little string to grab. Just last month I was at the mall, about to leave. I had put him in his carseat and was folding up his stroller when his pacifier flew out from the stroller, onto the ground. The only way he sleeps in the car is with his pacifier and I didn’t want to take him back out of his carseat, and lug him and my diaper bag all the way back to the mall just to wash off his pacifier. It’s also hard to get the water hot enough in most stores to kill any bacteria. I decided to see if he could make it home without it…BIG MISTAKE. I had one cranky baby, and I was one tired mama by the end of it all. These wipes mean I don’t have this problem anymore. This small package is great for my diaper bag, and they put my mind at ease about something that will be in my son’s mouth. They are alcohol free, and great for sanitizing other small objects, such as toys.

I would highly recommend both products for any mama’s out there!

Disclosure: No compensation was given for this review. I did receive a sample product from the sponsor for the purpose of this honest review. All opinions are 100% my own. For full disclosure click here.