You are here: Home / Travel / Travel Tips 101: Secrets The Airline Wants You to Know 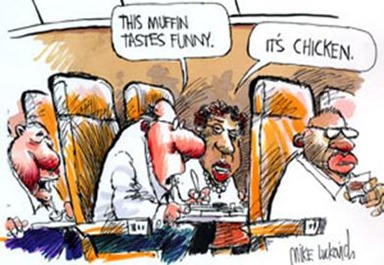 If you’re flying to visit friends and family this summer, you’re probably already dreading the lines, crowds and delays at the airport. Traveling during this time of year tends to be busier than usual, but there are ways to get around common annoyances. Read on for insider tips (from the airlines) and info that can make your travel experience much more enjoyable.

1. When it comes to flight delays, we often don’t know any more than you do.
Boarding a flight and then sitting on the tarmac for upward of an hour is frustrating for travelers, especially when the cause of the delay isn’t being explained. But chances are, the airline isn’t holding out on you—they don’t know much either. "Circumstances like air traffic control, weather and operational issues are, for the most part, beyond the individual carrier’s control," says Abby Lunardini, a spokeswoman for Virgin America. "Oftentimes in these situations the information that the pilot receives from air traffic control is incomplete or in flux, so the crew is very limited in what they can pass along to passengers." The lesson? We’re all in it together.

2. Most airport lines are optional.
Think air travel is synonymous with queuing up to check in, go through security and rebook canceled flights? Aside from security lines, most other queues can actually be avoided. Many airlines will let you check in online, eliminating the need to wait for assistance at the airport. And if your flight is canceled or delayed and you need to change your travel plans, forget about crowding around the employees at the gate. "There’s this sort of mob mentality that happens when angry customers stand in line together. They start sharing stories and get madder and madder until they explode in the face of someone who has nothing to do with any of their problems," says Brad Hawkins, a spokesman for Southwest Airlines. "The best tactic to get out of a bad situation is to step away. Get on the Internet or get on your phone to call the airline’s 800 number. All of those channels can help accommodate you—and you won’t have to stand around waiting."

3. Discounts are available for some airline fees.
Many carriers have recently added surcharges for everything from headsets to checked baggage to changing your flight. While these fees aren’t going away anytime soon, there are ways to shave a little bit off your bill. United Airlines will give passengers a $3 discount on checked bag fees (which start at $20) if they check in and pay for their luggage online. Virgin America offers fliers the option to buy refundable tickets, which will let you change or cancel your flight at no charge; Southwest Airlines doesn’t charge a change fee at all.

4. Want a good fare? You don’t necessarily have to book your ticket far in advance.
In the past, the general rule for getting the best price on plane tickets was that you had to book your flight at least two weeks in advance. It’s not so cut-and-dry anymore: If flights aren’t full, you may luck out and get a great fare right before the departure date. American Airlines and Delta Air Lines both offer a last-minute deal section on their websites; JetBlue Airways lists deeply discounted last-minute fares on their JetBlueCheeps Twitter page.

5. We can’t do anything about TSA or FAA regulations.
Hate those full-body scanners? Can’t stand to turn off your phone during takeoff? There’s nothing your airline can do about protocols like these. "Refusing to turn off a personal electronic device or delaying doing so is a violation of FAA rules, and the FAA makes all airlines and flight crews strictly accountable to enforce these rules," says Lunardini. "And with regard to liquids and what can be carried on, the airlines have little to no say over this, as these regulations are mandated nationally by the TSA."

6. To avoid a stressful airport experience, travel against the grain.
If your travel plans are flexible, you can avoid battling the crowds: Plan to fly when everyone else isn’t. "Saturday is our least-traveled day of the week," says Hawkins. "As for during the week, think of the traditional business day—early-morning and late-afternoon flights will generally be the busiest. If you have the flexibility to move around those boulders of supply and demand, you’re going to have more ease of travel."

7. Not enough people take advantage of frequent flier programs.
"Everyone traveling with a paid ticket can earn frequent-flier miles," says Valerie Waller, a spokeswoman for United Airlines. That means that your children are eligible to start working their way toward a free trip. "Enroll your kids to be sure that they’re earning miles as well. Double-check that the name on their plane ticket matches the name on the frequent-flier account exactly."

8. To avoid getting bumped, check in online.
Many airlines "oversell" their flights to balance out the fact that on most departures people will cancel or not show up at the last minute. Overselling ensures that each seat will be filled. But what happens when everyone shows up? If no one volunteers to give up their seat (often for a travel voucher), the airline will bump passengers to the next flight. "The easiest way to avoid an involuntary bump is to check in 24 hours in advance," says Hawkins. "Once you have a seat assignment and boarding pass, then you’re confirmed on that flight." So when you get an email that your flight is ready for check-in, be sure to take action.